If you can add to this story please use the contact form below! 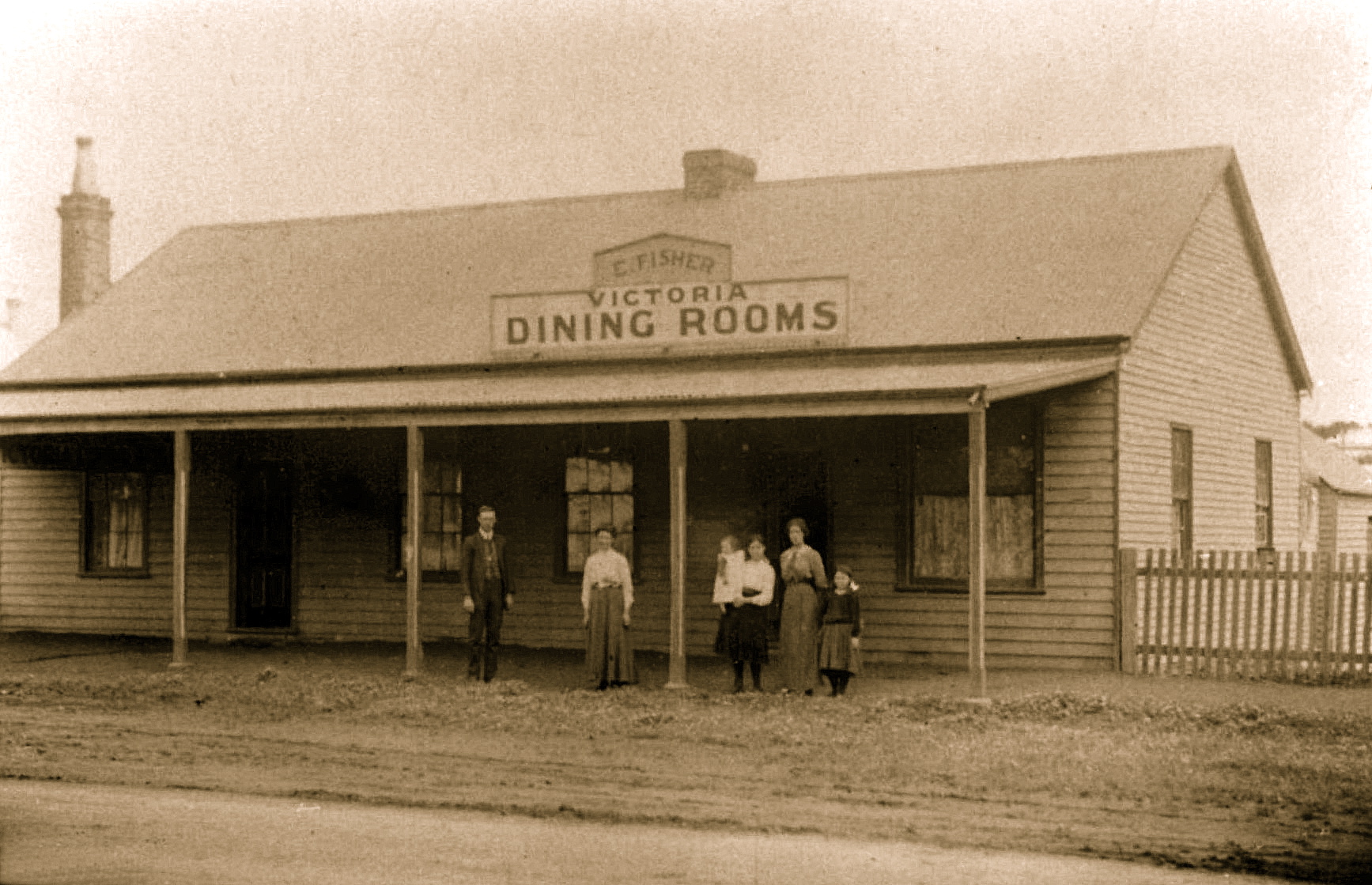 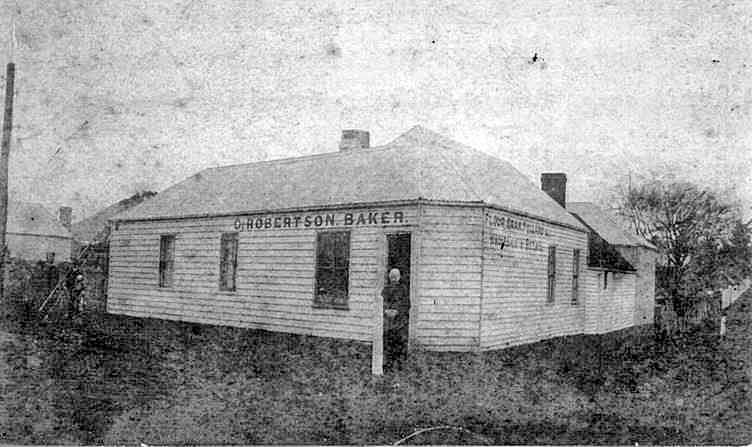 ‘EVERY PICTURE TELLS A STORY’

This is one of my favourite photos as it tells so many stories of early Camperdown homes, business premises and the people associated with them, at a particular time.

The c1892 photo was probably taken from the two-storey Mechanics Institute building, erected in 1890, on the corner of Manifold and Bath Streets, looking to the south west.

1. The building facing Brooke Street with signwriting on the gable was the business of Wheelwright and Blacksmith, Robert Spence, lessee of the property by 1885. These occupations, working with wood and iron, went hand in hand in producing the wooden wheels and iron tyres for the modes of transport of the time, horse shoes, and many other essential items.  Spence and his wife Elizabeth arrived from County Antrim Ireland in 1863, travelling to Camperdown the following year, where their family of six children were born. The business operated at the corner of Brooke and Moodie Streets, until Spence died in 1908. The site was later operated as coach builder and garage before being replaced in the 1980’s by a new building which has housed an indoor cricket centre, supermarket and a fitness centre.

2. ‘Glenora’ on Ware Street was built in 1869-70 for James H Robinson and his wife Mary.  In 1882 they moved to their new two storey home ‘Monamithgya’ (now part of Camperdown Hospital), set on 20 acres  and sold the ‘Glenora’ property to James Maconochie. By 1889 Glenora was owned by Thomas Dodds. The land was originally part of the Aboriginal Reserve but this was rescinded and the land auctioned in 1866 and 1867.  Glenora has had many owners and uses, including operating as a private school and is now divided into flats.

3. The stone home and consulting rooms of Camperdown’s first resident doctor, James P Lawrence, Surgeon RN and family, built before 1870, was on a 10 acre allotment, between Walls and Bowen Streets, with access from Bowen Street.

When Dr Lawrence died in 1866 aged 47, his wife Annabella and their nine children moved elsewhere in Camperdown, letting this property. It was leased as a family home and also as a boarding house. Annabella and family moved to Melbourne and then property owner, Campbell McArthur, subdivided the property into 16 allotments in 1900 fronting a new road, Hopetoun Street. Lawrence’s home was demolished in 1939 allowing a more modern home to be built (29 Hopetoun Street).

The more than 100 acres of land bordered by Walls, Manifold, Bowen & Fenton Streets was originally surveyed in 5 and 10 acre suburban allotments, with Henderson Street the only through road. This resulted in most pre 1900 homes being built with frontage to the access roads. Post 1900 most of these large allotments were subdivided into house allotments of ¼ or ½ an acre with a new east-west road for each subdivision.

4. The two buildings in Manifold Street on the left of the photo have not been positively identified but in 1882 were occupied by W Field, Druggist, and R. Bowley, Saddler, both listed as shops and dwellings. The third clearly shows ‘Heytesbury Restaurant’ on the corner of Brooke Street. This was operated from late 1887 by Mr and Mrs James Robertson who advertised ‘Good accommodation, Splendid grass paddocks, Free stabling, Horse feed kept on the premises’.  Mrs Claxton took over the business in 1889 when the Robertson’s moved to Mildura. In later years the site housed a Skin Store and more recently a paved car yard.

5. Temperance Hall. This was built for the Camperdown Temperance Society, and officially opened in August 1861 with two consecutive full-house evening meetings attended by official dignitaries and many district residents.

The hall was also the meeting place of other local temperance organisations –  Band of Hope, Independent Order of Good Templars and Independent Order of Rechabites, and for church services before some denominational churches were built. The ante-room was used for small meetings and as a supper room.

Being Camperdown’s only hall the venue was utilised for entertainment, concerts, and many social activities.  Despite the larger Mechanics Institute hall being built in 1874 the temperance hall continued to be used extensively. The hall trustees eventually leased the property to the Salvation Army then to the Camperdown Association of Girl Guides in 1954. The modern Guide Hall stands on the original Temperance Hall site.

The building was offered for private sale in 1914:

In 1904 Alexander and Laura Love (nee Chambers) purchased and operated the property. Alexander died in 1906 and Laura married Duncan Grant in 1908, retaining ownership of the property, which then continued as a boarding house run by lessees. The property had not sold in 1914 and by 1920 Laura and Duncan occupied and ran the business, which they renamed ‘West End Coffee Palace’. After both passed away in 1937 the freehold owner was Maxwell McDowall and boarding house keeper was Daisy Taylor. By the early 1950’s it was the home of Reginald Braddy and by 1961 vacant land in ownership of McKenzie Motors.

7. George Robertson’s Residence and Bakery. George and his wife Agnes arrived in Camperdown in 1870 with their seven children, five born in Geelong and two in New Zealand. He immediately set up his bakery business on ½ acre of land situated at the corner of Manifold and Walls Streets. The building consisted of a residence, shop and bakehouse. Three more children were born before the end of the 1870’s.

The home to the east of the bakery building consisting of a 7 roomed home and store on ¼ acre land was also occupied by George and family. When he passed away in 1911, aged 75 years, he had been a baker on that site for 41 years. By then he also owned all the vacant land between the Temperance Coffee Rooms and his property, except for one ¼ acre block.

‘George Robertson was well known for his beautiful bread and on certain days of the week he would walk from door to door vending his excellent buns, priced at one penny each’. (Quote from  R A McAlpine).

The corner property was purchased by J M Kline, continuing to operate as a bakery. A private home is now on the site.

8. Residence of Andrew Walls. This home, on ½ acre of land, was built in 1884, the year Andrew Walls married Elizabeth Aikman of Mortlake. He had arrived in this area as a small boy with his parents, early residents John and Mary Walls, in 1854.

Andrew was employed in Government positions as a Clerk at the local Sub-Treasury and Land Office, Electoral Registrar, Clerk of the Police Courts and Acting Clerk of Petty Sessions. When he transferred to St Arnaud in 1889, then in 1892 to Head Office of the Lands Department in Melbourne, their home was leased.  Andrew Walls died in Melbourne, aged 55 years, in 1904.

Elizabeth then moved back to their Camperdown home, where records show there was also a second small residence on the property, tenanted. When Elizabeth died in 1944 the property passed to her daughter Alison Kerr, who with her husband lived in the home from 1949 until her death in 1961. The property was then sold and continues to be a private home.

9. Cheese and Butter Factory. Located on a two acre site at the western corner of Manifold and Bowen streets, purchased from Manifold Bros in May 1891, for £50 per acre, the factory opened for business in November, just 6 months later. The fledgling factory and residence can just be seen. The funds were raised by selling shares to suppliers. Growth in the dairy industry followed with the factory, with employment opportunities also expanding rapidly.

10. ‘Scott’s Paddock’. The heavily treed area on the horizon, west of the Bowen Street boundary of Camperdown township, was owned by Manifold Bros but known as Scott’s Paddock as surveyor R D Scott had been long term lessee of the land for grazing.

The property was bordered to the west by Park Road, south by Park Lane, east by Bowen Street and a little north of Gnotuk Road. The area was subdivided for sale in March 1902 as house lots and small dairy farms consisting of 98 allotments of between ½ acre and 22 acres. Park Avenue and Gnotuk Street were new roads through the subdivision. The Cheese and Butter Factory, by then 3 acres, was not included in the sale.

Many buyers purchased more than one allotment for their farms. The proximity of the dairy factory was a great advantage to both parties.

11. Finlay Avenue. The elm trees had been planted in 1876 and were growing well,  however a smaller one is a likely replacement and fenced for protection, possibly from the main mode of transport, horses.

Two early cottages can also been seen along Walls Street.

Shadows along the bottom right of the photograph show the north side of Manifold Street also had quite a few buildings. A slightly earlier photograph taken from the same place shows the roofs along that block.

Our Heritage Centre building (I.O.O.F Hall) was built to the left (east) of the photograph in 1896.

Researched and written by Maree Belyea 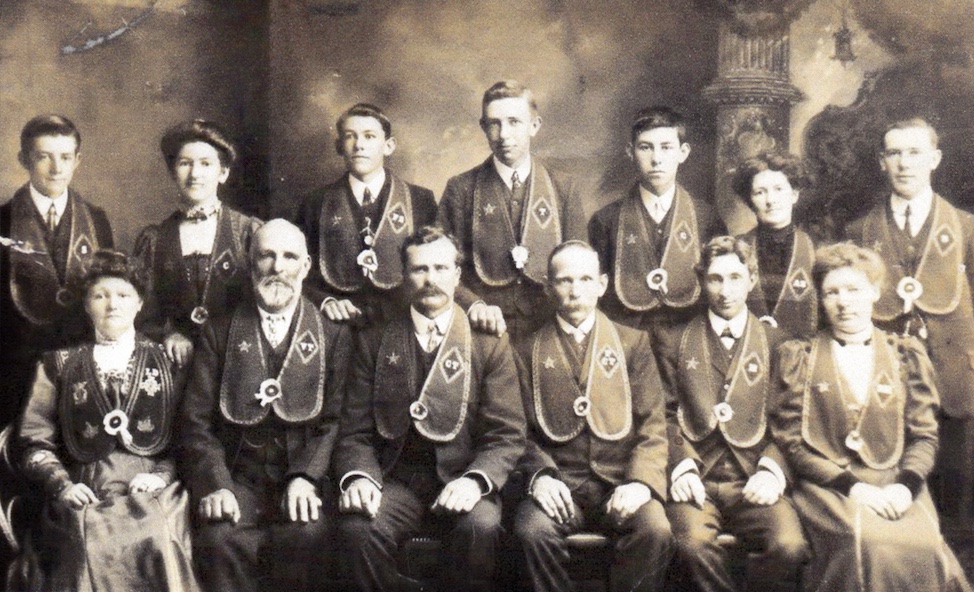 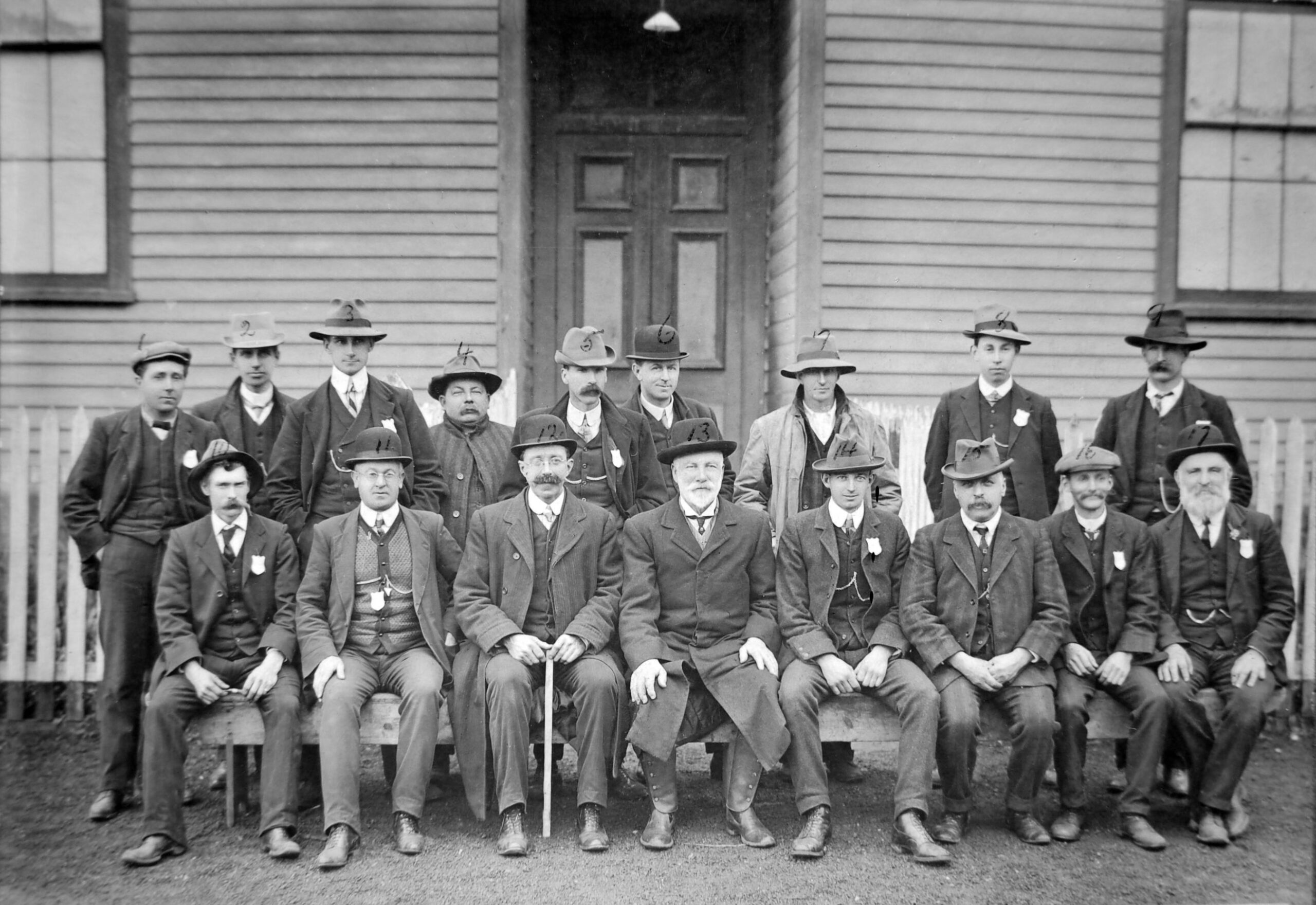 Do you have any further information regarding the photos? Let us know!

We’d love to hear from you – please send us any further details re names, related family stories or streetscape building info that you might have.

If you have photos to add please email them to camperdowndhs at gmail.com.